The Glass House Mountains are a statuesque and iconic symbol of the Sunshine Coast. They were so named by Captain James Cook R.N., on May 17th 1770 for their likeness to glass making furnaces near his home in Yorkshire, England. From Cook’s journal, on this day: “These hills lay but a little way inland, and not far from each other; they are very remarkable on account of their singular form of elevation, which very much resembles Glass Houses, which occasioned my giving them that name. The northernmost of the three is the highest and largest. There are likewise several other peaked hills inland to the northward of these, but they are not near so remarkable.”

The Blackall Ranges were first traversed by European explorers in the 1840s. The ‘scrub’, as the rainforests were then known, covered much of this range and its western valleys. Almost 40 years later, the lure of timber brought the first white pioneers to the Blackall Ranges. Aborigines told them of “big fellow Wootha” (cedar trees) which abounded over the ranges. Large quantities of red cedar were extracted from this area during the 1880s. Trees were felled by axe-men using spring boards to reach above the buttressed roots. White beech, hoop and bunya pine were also favoured. 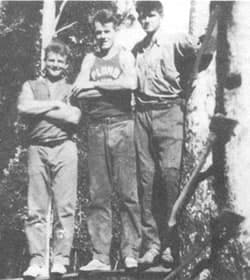 Logs from the plateau of Maleny and the Blackall Range were hauled to the top of the range at nearby McCarthy’s Shute Road, and shot down a log channel to prevent damage. If rolled the logs would have smashed on the rocks below. At the bottom, they were pit-sawn into flitches (segments) for easy handling. Two men worked the pit-saw, one standing above the log and the other below in the pit. It was very tiring work and took weeks of preparation. Logs were also transported by bullock wagon to the Coochin Creek Rafting Grounds. The rafting ground was used by early timber getters as a place to store timber and logs, which were fastened together to form rafts and floated 13 kilometres down to the mouth of Coochin Creek, then into Pumicestone Passage, ready to be collected by passing steamers and sailing ships for transportation to Brisbane.

Around the time the first settlers arrived, the trade in cedar and beech had almost stopped as the supply was all but exhausted. By the 1890s, the timber getters turned to felling hardwood (mainly Eucalypts), which was in plentiful supply, and at the time only the best trees were used.

Poor timber prices led to the demise of timber mills. At the turn of the 20th century, land clearing by settlers later made way for dairy farming, crops and pasture which continue today.

Mary Cairncross Scenic Reserve is a last valuable remnant of the magnificent rainforests which once covered these Ranges.