Mary Cairncross is one of only a few confirmed breeding habitats for the southern subspecies of Pink Underwing Moth, illustrated above. This species is found between northern NSW and north-east Queensland. 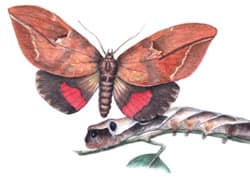 The bird life of the Reserve is well documented and includes 139 recorded species including the rare Grey Goshawk. Our Brilliant Birds section features twelve of our most notable species and provides a spotters’ guide.

The other fauna of the Reserve is less well known but scientific surveys have been carried out since 2007 to increase our knowledge and understanding of the resident fauna. A colony of Red-legged Pademelons which are habituated to  human disturbance is an unusual feature of the Reserve.

Several native mammal species have been recorded in the Reserve including three small representatives of the kangaroo family – the Red-legged Pademelon, the Red-necked Pademelon and the Red-necked Wallaby. The latter are more likely to be in the forest towards dusk when they are most active. Nocturnal marsupials are also present including the Mountain Brushtail Possum. Native mammals likely to have once been present in the locality have apparently disappeared including various species of Spotted Native Cat and Marsupial Mice.

The streams around the Reserve contain significant frog species, a rare Spiny Crayfish and other fauna which depend on high water quality.

Click on the links below for more information on our amazing animals!