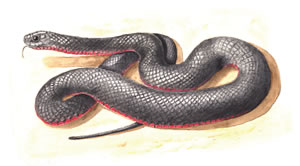 The red-bellied black snake is one of Australia’s best-known venomous snakes. It is iridescent black on its back with a light brown snout. Its common name comes from the distinguishing marks on its belly which is cream to pink with the edges of the belly pink to rich red in colour. The red belly pigment is easily visible on a coiled or moving snake. This snake usually grows to a length of 1.5 metres but can exceed two metres. The female bears between 5 and 40 live young which are born in membranous sacs from which they emerge soon after birth. Their diet includes frogs, reptiles and small mammals.

The ‘red belly’ is a diurnal snake usually found around water such as streams, swamps and lagoons but sometimes ranges well away from these areas. Also found in rainforest and wet eucalypt forests, males in search of mates may stray considerable distances over varied terrain during late spring. Once common throughout the southeast, it is now much more difficult to find. Their scarcity may be due to attempted predation of the highly poisonous cane toad and to habitat destruction.

It is not an aggressive snake and will avoid confrontation with humans. If provoked, it will recoil into its striking stance as a threat and escape at the first opportunity. It is considered dangerously venomous.