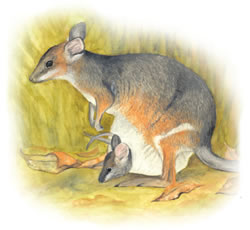 A rainforest wallaby, the pademelon is an ecological specialist with particular diet and habitat needs. Listed as vulnerable in NSW, extensive clearing has destroyed habitat throughout its range and predators such as dogs have reduced populations. This Reserve provides a refuge, helping to secure its status.

Pademelons are active most of the day and night, resting during the afternoon. They forage for food by day in the forest and after dusk move to feeding sites on the forest edge. They have a peculiar habit of resting against a favourite rock or tree, head drooped, and tail between their legs. Mostly solitary, this pademelon can feed in small pods and, if disturbed, it thumps the ground with hind feet to warn others.

A soft clucking is made by the female to call its young, and by the male during courtship, with harsh rasping sounds in hostile encounters. Diet consists of fruit (figs), fungi, berries, leaves, grasses, tree bark and some insects.

This pademelon is one of the smallest of the macropods, standing 40 – 55 cm when upright. Their small, compact bodies make them well adapted to movement through the dense rainforest understorey. Disguised by a thick grey/ brown fur and creamy/ pale underbelly, their name refers to the rusty colouration of the limbs, cheeks and tail.

These marsupials have developed an efficient birth procedure. Most macropods and some mammals have a reproductive system known as embryonic diapause which delays embryo development. Females give birth to a single young 3-6 weeks after mating. Soon after giving birth, if she mates, she becomes pregnant again.

With the newborn youngster relying on the pouch for up to 7 months, it is not a good strategy to give birth again so soon. Instead, the new embryo or blastocyst is put on hold – the youngster suckling at a teat causes the blastocyst to remain in a state of suspended animation until the juvenile is ready to vacate the pouch. Development then resumes and another pademelon is born a few weeks later. In this way, the mother has three dependants – a young at foot, a pouch baby, and a stalled embryo in her womb.

The mother is even able to supply two different types of milk at the same time. One is for the developing baby and the other, a higher energy milk, for the maturing joey.